Hey folks! Thought I'd post a little update here for the keeners who want to keep up with what's going on behind the scenes. We have some small announcements about the second half of summer and what we'll be up to, particularly between now and the (so far mythical) milestone of getting out of beta.

To refresh your memory, we were planning for our next steps to be the Big Software Upgrade and completing the subscription system, then starting the full launch 1 month countdown clock. Well...change of plan: it turns out that while Drupal 8 (the software version we'll be upgrading to) is all ready to go for new site builds, it's not completely ready for upgrades. While this is a bummer in some ways, as it'll delay us making a lot of the user interface and search improvements we really need, the silver lining is instead of spending a bunch of time on the upgrade this summer, Bruno's going to work on some other top priority improvements! Oh yeah, did I mention that? No I didn't, cause we were kind of holding out on you just in case something came up! ;)

Exciting news: Bruno just completed a big freelance contract last week, and now (aside from little bits for his one ongoing client) he's blocked out the rest of the summer to work on Textillia! Hurrah! We weren't sure this would be possible initially, but we talked it over and decided it was necessary to get over the hump of getting out of beta. I'll take this as an opportunity to remind everyone that donations are very welcome, we can use all the help we can get while he's taking more time off paid work!

You'll be seeing Bruno back in the forums more as he works on things, and there'll be improvements popping up around the site! The plan is for him to triage a bunch of priority smaller issues, and then we have a few big ugly pieces to tackle, some of which won't be super noticeable to you all. It's mainly geared towards getting the existing functionality more polished up and preparing for the subscription system, since it has a bunch of consequences to how the community managed parts of the database get handled in the backend of the system.

We plan for Bruno to work mainly on Textillia at least from now until his parents come over from Belgium for a visit at the end of summer, and then we'll see how the cards fall for his freelance gigs in the fall/winter, and how the timing of the full launch of Textillia plays out. We'll be sure to keep you posted with any major news.

I think that's it for now! If you have any burning questions, post 'em below and we'll do our best to respond!

ps. Thanks as ever to everyone who's volunteered, or just gotten really involved as an early member. We appreciate your contributions and feedback soooo much!

pps. I know not everyone is interested in how I'm doing on the health front (for those who are new around here, I've been struggling with a worsening chronic illness), if you're not just stop reading now! But for those who are, here's a mini update below our big silly faces... 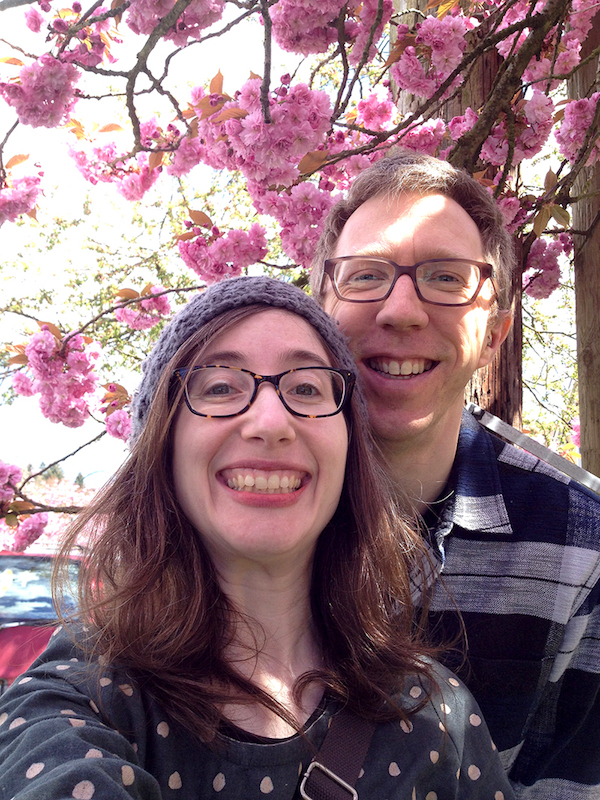 In the spirit of real talk, the truth is I've been a lot sicker overall through the spring and early summer. I've been suffering with debilitating fatigue and muscle weakness on top of the hand pain and everything else, meaning very little time spent sewing or working on Textillia. But it's not all bad news, and actually there's a little light at the end of the tunnel, because a few weeks ago I saw two fantastic new doctors! They both had several very concrete new ideas about what might be wrong with me, and it's literally the first time I've ever felt like I might actually get some real help on the health front. I finally have some reason, aside from stubborn optimism, to hope I might actually get a proper diagnosis, which is the major barrier between illness and treatment options that could get me better!

So while we're still prepared to hire someone once we can afford to if I'm not able to do more work on Textillia, there's a little bit of optimism returning that perhaps one day I'll be doing better, and be able to work more again. It's all still very early, and a new chapter of this slow-as-molasses process, but some doors are opening and we're very relieved to say the least. This summer is going to be a bit of a healthcare marathon for me, as they want to put me through a bunch of new tests and a zillion appointments, and I'll be using most of my energy on that. But hopefully it'll be worth it in the long run! Of course, I'll still be around and keeping an eye on things here on Textillia as much as I can, and so will Bruno, who continues to be awesomely supportive helping me navigate these adventures in healthcare while juggling work and everything else.

Many thanks to everyone who's been so patient and understanding with how this has impacted the speed of Textillia's development, and also for rooting for me and sending well wishes through this challenging time, I appreciate it more than you know. :) xo